Greetings Beaders, Leah here from Eureka Crystal Beads! I’m excited to bring you the 4th installment of 12: Birthstones! At the beginning of each month I’ll bring you a blog that is chock-full of everything you might want to know about that month’s stone. Were you born this month? If so, you might take particular interest in my fourth blog in this series: PERIDOT, the birthstone for August. 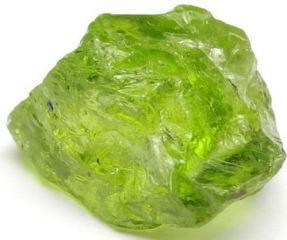 Peridot is one of the few gemstones that occur in only one color: an olive-green. The intensity and tint of the green however depends on the percentage of iron that’s contained in the crystal structure, so the color of individual Peridot gems can vary from yellow, to olive, to brownish-green. In rare cases, peridot may occur in a medium-dark toned, visually pure green with no secondary yellow hue or brown mask. Peridot is gem-quality Olivine, and Olivine in general is a very abundant mineral, but gem quality Peridot Olivine is rather rare due to the mineral’s chemical instability on the Earth’s surface. Interestingly, Swarovski makes both an “Olivine” crystal bead as well as an “Peridot” crystal bead. If combined, then they truly make a more accurate depiction of the real gemstone!

Our lovely August birthstone can be mined in Arizona, Arkansas, Hawaii, and New Mexico. Outside of the US it can be found in Australia, Brazil, China, Egypt, Kenya, Mexico, Myanmar (Burma), Norway, Kashmire, Saudi Arabia, South Africa, Sri Lanka, and Tanzania – and while it can be mined in many places, as previously stated, finding large or gem-quality specimens is rare. Are you hoping to get your hands on this lovely vibrant color to make yourself some jewelry? Here are a few of my personal favorite “Peridot” or “Olivine” colored items from our website, EurekaCrystalBeads.com

OR… you can snag some of the REAL DEAL stuff with these 2mm Peridot hand-cut round faceted gemstone beads!

INTERESTING FACT: Most peridot formed deep inside the earth and was delivered to the surface by volcanoes. Some also came to earth in meteorites, but this extraterrestrial peridot is extremely rare, and not likely to be seen in a retail jewelry store.

You might be asking yourself, how exactly should “Peridot” be pronounced? This has been a long-standing debate among many. Some pronounce it with the end syllable rhyming with “hot” while others pronounce the end syllable as rhyming with “doe.” So which is CORRECT? Well, to make a long story short – both! Dictionaries historically listed the pronunciation as “per-i-DOT” (though that has started to change and they are beginning to include both pronunciations) but those in the gem and jewelry community, for decades, have faithfully stuck by “per-i-DOE” – but why? Well, the origin of the word is French, and that would suggest that the “t” should be silent. However, the gem was first mined in quantity near Peridot, Arizona (and the town of Peridot does pronounce the hard “t”). Are you still with me? Essentially, it is considered appropriate to use either, it simply depends on who you’re talking to – and if you use the pronunciation they consider incorrect, you can often expect a subtle correction. 😉 (For the record: I say per-i-DOE”)

If you’re a believer in the metaphysical properties of stones, Peridot is known for alleviating jealousy, resentment, spite, bitterness, irritation, hatred, and greed. It’s also thought to reduce stress, anger, and guilt and open our hearts to joy and new relationships. Want to help things along? Consider wearing this 10mm Peridot Swarovski Crystal HEART pendant!

Ok faithful readers, I hope you learned some new facts about August’s lovely bright green gem as well as some great Swarovski Crystal alternatives to the real thing that we carry in many shapes and sizes on our website!